“INFONAVIT is the main Mexican state institution for ensuring that families can exercise their constitutional right to decent housing.” EPN

It is also one of the most solid pillars of social security in Mexico. It is the backbone of mortgage financing in the 32 states and a factor of prosperity and development for the entire nation. 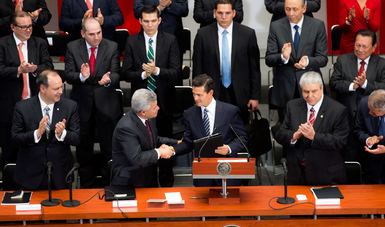 The enactment of the Law or the Amendment to the INFONAVIT Law creates the legal framework for adapting the financial operation of the Institute to the constitutional reform that allows de-indexation from the minimum wage.

• It is the main driver of housing development in Mexico, as borne out by the fact that nowadays, seven out of 10 home loans in the country are granted by INFONAVIT, he said.

• During the current administration, INFONAVIT has granted 2,050,000 housing loans, benefiting over 7.5 million Mexicans. This means that in just three years, it has granted one out of every five of the loans it has provided throughout its history. In just three years, one in five of the loans granted throughout its 44 year-history have been delivered, he said.

• The president delivered INFONAVIT credit number 9,000,000. Reaching nine million is easily said, but it means that one in four homes built in Mexico has been funded by the Institute, he said.

President Enrique Peña Nieto said today that the Institute of the National Fund for Workers’ Housing (INFONAVIT) is “the main Mexican State institution working for families to exercise their constitutional right to dignified, decent housing.”

Thanking the three sectors comprising this institution: labor, business and government, for consolidating the Institute as the main driver of housing development in Mexico, the president said that this is borne out by the fact that nowadays, “7 out of 10 home loans in the country are granted by INFONAVIT.”

The president explained that this institutional effort, which includes co-financed loans with private banks, created earnings of over 530 billion pesos, triggering productive investments in over 30 sectors linked to housing construction.

During the event, the president congratulated and presented a symbolic key to her new home to Leticia Isabel Maldonado Calleros from the state of Colima, for obtaining the nine millionth INFONAVIT housing loan.

The president said: “Reaching nine million is easily said, but this has meant that one in four homes built in Mexico has been funded by INFONAVIT.”

He noted that INFINAVIT's extensive housing and financial work, “Is present in every city and region of our country, contributing to its transformation.”

"INFONAVIT also one of the most solid pillars of social security in Mexico. It is the backbone of mortgage financing in the 32 states and a factor of prosperity and development for the entire nation,” he declared.

President Peña Nieto stressed that INFONAVIT’s achievements in the past three years, “Are especially noteworthy because they were achieved in the context of structural change brought about by the new National Housing Policy,” launched at the beginning of this administration to achieve the objectives of achieving greater inter-agency coordination, moving towards a model of sustainable, intelligent urban development, responsibly reducing the housing backlog and most importantly, ensuring decent housing for Mexicans.

He stressed that INFONAVIT has decisively contributed to the gradual achievement of these objectives, in the following ways:

FIRST: INFONAVIT has become the main promoter of sustainable housing. Today, all new homes, financed by the Institute, have eco-technologies that save water, electricity and gas, which helps reduce families’ monthly bills and allows developments to be more environmentally-friendly.

SECOND: The Institute is playing a key role so that families can obtain access to larger, better quality housing and, above all, be closer to their workplaces. To this end, FONAVIT increased the maximum amount of credits by 76%, from 236 to 415 times the minimum wage and instituted the peso credit scheme, which provides greater protection from annual minimum wage increases. To date, more than 560,000 loans in this modality have been delivered; funding for one-bedroom housing has been virtually eliminated and quality coverage has been introduced to protect homes from structural and waterproofing flaws.

THIRD: INFONAVIT has allowed hundreds of thousands of low-income beneficiaries to have access to decent housing. During this administration, 73 percent of its credits, in other words, three out of every four housing loans granted, have been for workers earning less than five minimum wages. A key element for achieving this is that more than 400,000 of them received a federal grant to make a down payment on their new home.

FOURTH: The Institute is helping to reduce the housing backlog. The numbers speak for themselves: from 2012 to 2014, this lag decreased from 31.2 percent to 29.2 percent. Moreover, in the subgroup of beneficiaries, it fell from 18 to 16.4 percent.

FIFTH: Infonavit is contributing to workers’ savings, so that more families can have their own home. The Housing Subaccount earned an annualized return of 6.5% in 2014 and 6.8% in 2015, both above the average earnings of other similar instruments.

The president declared that through these advances, “INFONAVIT has become a modern, efficient and reliable financial institution, with proven social commitment. But above all, it is an institution that fully assumes its responsibility to Mexican families.”

During the event, President Peña Nieto also signed the enactment of the amendment to the INFONAVIT Law , and witnessed the signing of an agreement between the Institute and the Association of Mexican Banks to promote increased funding and portability of loans for home purchases and improvement. The agreement seeks to provide more and better programs for access to housing, within a framework of healthy competition.

He said that from now onwards, “We must continue to promote innovative solutions to expand its credit supply and reinforce its financial strength.”

“Today, we have taken a step in that direction through the enactment of the Law or the Amendment to the INFONAVIT Law, which creates the legal framework for adapting the financial operation of the Institute to the constitutional reform that allows de-indexation from the minimum wage. This modification is essential to preventing financial imbalances in the management of the institution’s assets and liabilities,” he said.

Director General of INFONAVIT David Penchyna Grub said that in the three weeks since the president’s instruction, an amendment was achieved which, “Through de-indexation, prevents workers’ savings from losing value and their credits from losing stability or entailing costs for families who already have an INFONAVIT loan.”

After thanking the deputies and senators for this achievement, he said that, “We must design more financial products for INFONAVIT members.” We need to make your savings account more efficient, by reducing costs, ensuring austere administrations and avoiding harming the assets of the true owners of this institution.”

He said that INFONAVIT will continue to work with private banks to assist workers through co-financing, longer terms, and “a stable government that has generated low inflation, in which we can hope to reduce rates.”

He stressed that the dwelling that obtained mortgage number nine million constitutes a benchmark because it is close to town, “Leaving behind that strategy of promoting housing in remote areas, where everyday life was more expensive than the mortgage to be paid.” "Today you have a well-built house, insured against accidents, with proper waterproofing and guarantees against hidden damage,” he said.

FINANCIAL MANAGEMENT AND ECONOMIC REFORMS HAVE ALLOWED HOUSING FINANCING TO ACHIEVE THE LOWER INTEREST RATES EVER IN THE HISTORY OF MEXICO: ASSOCIATION OF MEXICAN BANKS

For his part, President of the Association of Mexican Banks, Luis Robles Miaja, said that the government’s financial management and the reforms promoted by President Peña Nieto, “Have enabled the country to consolidate the foundations to become a fairer, more developed nation, to guarantee the welfare Mexicans deserve.”

He said that, “We face significant internal and external challenges.” However, he said, despite the adverse international situation and the behavior of housing financing and the economy in general, there can be no doubt about the success of the reforms and public policies.

He said that on the basis of the principles derived from Financial Reform and the efforts to boost competition in the sector, the agreement signed today seeks to develop financial products that will result in the granting of more, cheaper credit for home purchases and improvement and moving house.

This agreement, he said, “Will promote the reduction of interest rates on housing loans, which is the ultimate goal of our alliance.” He noted that this is possible, “Due to the fact that the government has ensured responsible, prudent management of public finances, as well as close, responsible coordination with the Bank of Mexico.”

"This stability, together with the Financial Reform promoted by the president, has allowed financing for housing purchases to achieve the lowest interest rates in the history of Mexico,” he declared.

AMENDING THE INFONAVIT LAW WILL RESULT IN SAVINGS FOR WORKERS: ACEVES DEL OLMO

Carlos Aceves del Olmo, Secretary General of the Confederation of Mexican Workers’ and President of the INFONAVIT General Assembly, said that there is widespread satisfaction with the de-indexation of the minimum wage, since its implementation will allow Mexican workers who already have a loan from the institution to save.

He said the contents of this bill, passed today by President Enrique Peña Nieto through the amendment to the INFONAVIT Law, reflect the interest of all the trade unions in the country.

“Today, the law will be applied strictly, effecting charges and debts in pesos, enabling Mexican workers who already have a housing loan to save, since the annual increase in the minimum wage, which was the basis of their debt, used to mean that their debt increased annually,” he said.

In the presence of President Enrique Peña Nieto, he said that, Today there is unity in the sectors, there is no division between the labor, business and government sectors. We are perfectly clear what our mission in this institution is.”

He pointed out that key agreements have been arrived at by a majority, and therefore, he added, “The workers’ sector respectfully invites the other sectors and the government to continue in this way.” And, as far as possible, we must restore the vocation of this Institute, which was created to grant loans to those who have least.”

Gustavo Adolfo de Hoyos, President of COPARMEX and representative of the business sector in INFONAVIT, said that the Institute grants and manages the largest number of mortgages in Mexico and is one of the largest in the world.

“It currently provides more than 70 percent of all house purchase loans and manages more than five million mortgages worth more than one billion pesos,” he said.

For the employers’ sector, he said, it is important to highlight the specific importance of housing in Mexico: it is a sector that grows at twice the rate of the national economy, which has already accumulated 19 months of continuous growth; it has an annual investment of 424 billion pesos; it is a sector that contributes 14 percent of goods and service production and one that creates direct employment for more than 3 million people and affects 78 branches of national industry.

He also explained that the INFONAVIT is the institution that, due to the amount of assets, is the chief administrator of resources for workers’ retirement. “At INFONAVIT we have over 55 million individual accounts with names and surnames, and we manage more than 850 billion pesos in their housing account.”