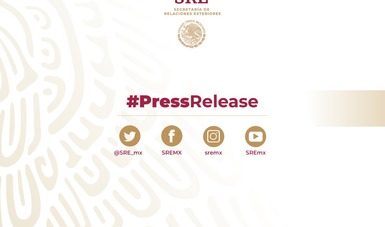 Both conventions are binding legal instruments designed to combat racism and discrimination in the Americas. The steps taken with these Conventions are part of Mexico's strategy given the increase in violence related to hate speech, xenophobia, intolerance, and white supremacy, as well as hate crimes due to homophobia, transphobia and ideas of racial superiority, in virtually every region around the world. Mexico's ratification of and accession to these Conventions demonstrates that it has clearly rejected these intolerable practices of discrimination and racism that can lead to hate crimes such as the one committed in El Paso, Texas, on August 3. Mexico believes it has an ethical and legal responsibility to denounce and condemn these acts and expressions.

Mexico will be the second country to ratify the Convention against All Forms of Discrimination and Intolerance, after Uruguay (May 2018). It will enter into force on the thirtieth day after it has been deposited,  making clear Mexico's commitment to human rights within its territory, and to promoting human rights in multilateral forums.

The measures taken with these Conventions are due to the joint efforts of the Senate Foreign Relations Commission headed by Héctor Vasconcelos, and the Foreign Ministry's areas for human rights and democracy and political coordination, under the coordination of the Undersecretary for Multilateral Affairs and Human Rights and the Interior Ministry's National Council to Prevent Discrimination (CONAPRED).

Mexico reaffirms its commitment to the total and unconditional eradication of racism and all forms of discrimination and intolerance in the region, given the current challenges posed by discriminatory practices and the increase in hate crimes that are committed due to national origin, ethnicity, sexual orientation, identity and gender expression, among others.

The Foreign Ministry and CONAPRED welcome this important joint effort between the executive and legislative branches.