Mexico calls on the international community to guarantee fair, equitable and timely access to vaccines around the world. Ten countries have acquired three-quarters of the total number of vaccines produced so far.

Mexico denounced the unfair access to COVID-19 vaccines this morning at a meeting of the United Nations Security Council (UNSC). In his remarks during the open debate on implementation of Resolution 2532 (2020) regarding the cessation of hostilities due to the COVID-19 pandemic, the Secretary of Foreign Affairs, Marcelo Ebrard, stressed that the Covax vaccine coalition, a multilateral collaboration that includes almost all of the countries in the world, must accelerate vaccine distribution and reverse the hoarding by ten countries that have acquired three-quarters of all vaccines. He said, "A conservative estimate is that there are over 100 countries in which not a single dose has been administered [...] we have never seen such a deep division that has affected so many in such a short time."

The Foreign Secretary said the pandemic has had a devastating social and economic impact throughout the world but has affected the poorest and most vulnerable countries to a greater extent. The progress made in peacebuilding and development has been undone and vaccination campaigns have been interrupted in 45 countries with humanitarian or refugee crises. He also stressed that it has caused a rebound in gender violence, to the detriment of girls and women.

Mexico, as president pro tempore of the Community of Latin American and Caribbean States (Celac), a forum that brings together 33 countries in the region for dialogue and political agreement, called for promoting multilateralism to fight the pandemic and highlighted the injustice of the inequalities created.  He said that the Covax vaccination coalition has been insufficient. Therefore, he asked that countries with limited resources, that won't have access to vaccines until the middle of 2023 if current trends persist, be prioritized.  "Guaranteeing universal access to vaccines is the only way to defeat the pandemic," he said.

Secretary Ebrard emphasized that inequality opens a gap between the countries without access and the other ten, "I don't think we've ever seen such a huge division." He said that the efforts of the Security Council, such as Resolution 2532 calling for a global ceasefire during the pandemic, must be supported, and the impact on women and youths should be at the center of the discussion. But, he said, fair, equitable and timely access to vaccines must be guaranteed. This is the main challenge that must be addressed. He urged the international community to strengthen the vaccine supply chains. “We must act urgently to reverse the injustice that is being committed, because the security of all humanity depends on it," he said.

With the support of the private sector, Mexico has been able to do the fill/finish of the AstraZeneca vaccine in cooperation with the Government of Argentina, which will benefit all of Latin America. He said that everyone else needs to be looked out for, as well. We must show solidarity with those who have no resources.

The purpose of the meeting was to discuss fair access for all countries to the COVID-19 vaccines, and implementation of Security Council Resolution 2532 (2020) on the cessation of hostilities during the COVID-19 pandemic. All 15 member States attended.  In his opening remarks, UN Secretary-General António Guterres, called for more solidarity in distributing the vaccines.

Full remarks by Secretary of Foreign Affairs Marcelo Ebrard to the UN Security Council on the challenges of ensuring equitable access to Covid-19 vaccines. 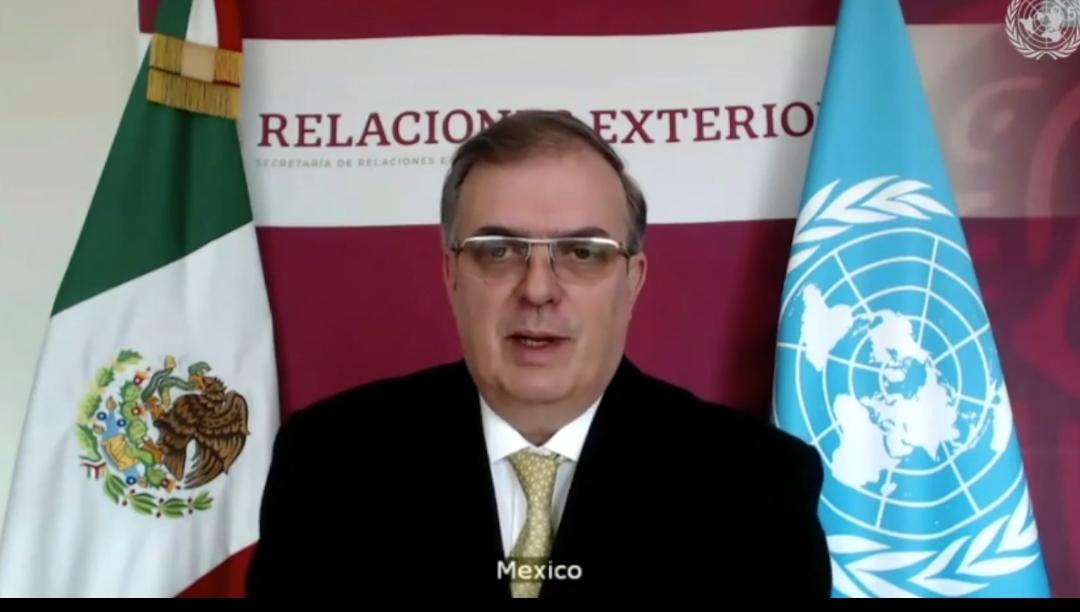