14th Meeting of the AMEXCID Advisory Board

The Mexican Agency for International Development Cooperation (AMEXCID) held the 14th meeting of its advisory board today, chaired by Foreign Secretary Marcelo Ebrard. 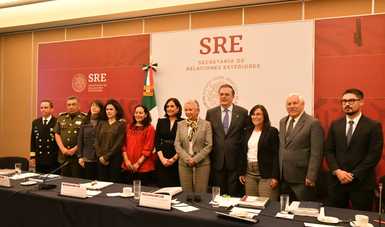 14th meeting of the AMEXCID Advisory Board

The Mexican Agency for International Development Cooperation (AMEXCID) held the 14th  meeting of its advisory board today, chaired by Foreign Secretary Marcelo Ebrard.

The Advisory Board is the agency's liaison with other areas of the government, helping to shape Mexico's policy of international development cooperation.

In his welcoming remarks, the foreign secretary highlighted the agency's importance, saying that it reflects the priorities of the various governmental areas for cooperation and development, which then represents Mexico around the world.

The 18 ministries were represented at the meeting, including the Secretaries of Interior, Social Welfare, Energy, Agriculture, Labor, and Agrarian, Territorial and Urban Development, in addition to the head of the National Council for Science and Technology (Conacyt).

During the meeting, Interior Secretary Olga Sánchez Cordero highlighted Mexico's development cooperation strategy, focusing on the Central American strategy and saying that it was unique because it will "help the beneficiaries directly, without passing through governments, civil organizations or local governments."

Agriculture Secretary Víctor Manuel Villalobos said that "many of the issues present in the region today are due to the conditions in our rural communities."  He commended the swift progress made in implementing Mexico's strategy in Central America, singling out AMEXCID as the agency that has made this possible.

Labor Secretary Luisa María Alcalde said that migrants are mostly young, and that the Youths Building the Future program is a very good alternative for them. The program is also being launched in other countries.  She discussed the meetings that have been held with business executives and officials from El Salvador, saying that the results had been positive and that more meetings will be held.

The Secretary of Social Welfare, María Luisa Albores, said that the launch of the Sowing Life program in Guatemala, Honduras and El Salvador will help stop migration by giving people a sense of belonging in their communities and encouraging them to stay on their land. The program seeks to mend the social fabric, create jobs and increase the production of the region's most important crops to achieve food self-sufficiency there.

Energy Secretary Rocío Nahle García said that Mexico has much to contribute to Central America in terms of technology and in helping to develop their energy system.  She said that “social poverty increases in communities that don't have electricity. Therefore, both in Mexico and in Central America, we are promoting the development of both conventional and renewable energy to improve the services in the sector."

The Secretary of Agrarian, Territorial and Urban Development, Román Meyer Falcón, reported that in terms of territorial planning and development, his area has worked to reduce territorial inequalities through the Urban Improvement Program, which this year is focusing on the border with the U.S. The National Housing Program - which will be presented in the coming weeks - includes seven UN criteria for adequate housing.

During the meeting, AMEXCID Executive Director Laura Elena Carrillo reported on the agency's work in 2019,  which includes coordinating 129 programs that benefit third countries, mainly in Latin America, and 330 in coordination with various donors such as the European Union, japan, Germany, Spain,Turkey, and the United Nations that are part of Mexico's national policy for development cooperation.

The actions taken in the south-southeast region of Mexico and Central America through the Mexico Fund and as part of the Comprehensive Development Program (PDI) were analyzed, especially the renovation of the ten migration stations in Mexico in partnership with the National Migration Institute, and the Sowing Life and Youths Building the Future programs in El Salvador, Honduras and Guatemala.

The programs will create 20,000 jobs in each country to improve the quality of life of their citizens and to address the structural causes of inequality. In El Salvador, 600 youths and farmers have registered in the programs' first stage. The program will begin in Honduras in the second week of December. The Advisory Council approved the International Development Cooperation Program 2019-2024, which serves as the basis for planning and implementing the government's international cooperation initiatives.

As the agency charged with inter-institutional coordination, AMEXCID seeks to improve the flow of information, capitalize on the cooperation received by Mexico and make the best use of the cooperation given by Mexico to other developing countries.