Remarks by Foreign Secretary Luis Videgaray on the U.S. Decision to Impose Tariffs on Mexican Steel and Aluminum 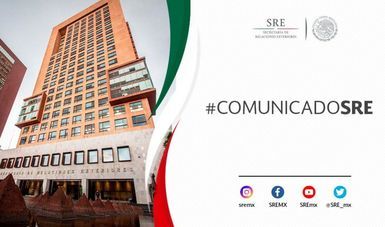 Foreign Secretary Luis Videgaray: Today, the United States government announced with no justification the imposition of tariffs on Mexican steel and aluminum and on steel imports from Canada and the European Union.

As European Commission President Jean-Claude Juncker said a few minutes ago, this is a bad day for world trade.

I would like to say three things about this:  In the first place, the Foreign Ministry categorically supports today's announcements by the Economy Ministry.  As you know, the Economy Secretary has already announced that the Mexican government will respond immediately with equivalent measures on various products such as flat steel products, lamps, pork legs and shoulders, cured meats and prepared foods, apples, grapes, cranberries and some cheeses, among others, for a comparable amount. These measures, announced by the Economy Ministry, will remain in place until the U.S. government eliminates the tariffs on our steel and aluminum.

With these measures, the Mexican government reiterates that it is acting as the sovereign nation that we are, as a nation with the ability and the will to defend our interests.

Second, I would like to reiterate that Mexico's position vis-à-vis the United States government is based on our constitutional principles and on our values. We have clear and explicit goals and we have limits. Mexico's position on trade, migration, security or any other area of ​​cooperation with the USA will not change because of offensive rhetoric or because of unjustified unilateral measures of this type.  As we have done all along, we will continue defending Mexico's interests with seriousness while seeking a constructive negotiation on all fronts, and we will continue defending the Mexicans in the United States as we have done with the unprecedented actions of our 50 consulates in the United States. While it is true that the United States is fully within its rights to determine its immigration policy, no one can place themselves above human rights and people's dignity and we will continue to defend Mexicans by using all the diplomatic and legal instruments at our disposal.

Third, we will continue to negotiate but, as President Peña Nieto said a few weeks ago paraphrasing President John Kennedy, "We will not fear to negotiate and we won't negotiate out of fear." Our positions are clear and we will continue working on all fronts to ensure that the relationship with the United States is all it should and can be, and this includes trade, where we will continue to defend open, free and rules-based trade, including the successful modernization of the Free Trade Agreement. Our positions, I repeat, are clear and will not change, either because of rhetoric or this type of action.

Lastly, I want to tell you that a few minutes ago the President spoke on the phone with Canadian Prime Minister Justin Trudeau and both agreed to, first, condemn and deplore the decisions of the United States regarding the tariffs.  Second, both Mexico and Canada share the need to react immediately with equivalent measures and, third, we will continue working in very close contact with Canada in order to continue defending open, free and rules-based trade in a coordinated fashion, including the successful modernization of the NAFTA. A few weeks ago, President Enrique Peña Nieto said very clearly, "Nothing can be above the sovereignty and dignity of Mexico." We will continue working in good faith and in all seriousness, but always based on our constitutional principles and the values ​​that define what we are and what we believe in. Thank you.