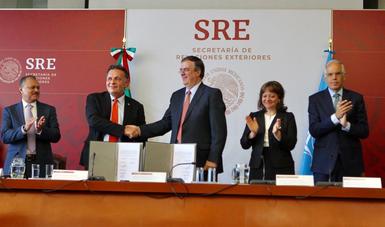 Foreign Secretary Marcelo Ebrard and Fabrizio Feliciani, regional director in Latin America for the United Nations Office for Project Services (UNOPS), signed two agreements for technical assistance in the Foreign Ministry's competitive bidding processes. The Undersecretary of Foreign Affairs, Julián Ventura; the Undersecretary for Multilateral Affairs and Human Rights, Martha Delgado; and the Head of the Administration and Finance Unit, José Antonio Domínguez, were also present at the signings.

The first agreement is related to the public procurement process for a supplier of Mexican passports, and the second has to do with the competitive bidding for health insurance for Foreign Service personnel posted abroad and local staff hired in the United States and Canada who serve our fellow citizens on a daily basis. UNOPS will contribute its abilities and international technical experience to these two important competitive bids.

Both agreements, signed this morning, are based on the Framework Agreement between the Government of Mexico and UNOPS, dated February 13, 2019. They demonstrate the government's commitment to transparency, accountability, and openness to international scrutiny for two of the Foreign Ministry's most important tenders.

The Foreign Ministry works with UNOPS, which is a subsidiary organ of the United Nations for the provision of services, and is considered a key UN resource for public procurement and infrastructure. It also develops national capacities.

The technical assistance provided by UNOPS and its work with the Foreign Ministry based on these two agreements contributes to achieving the 2030 Agenda Sustainable Development Goals. UNOPS is committed to working with the Mexican government to achieve an efficient, effective and transparent public administration that improves the quality of life of all Mexicans.

The two agreements signed today promote honesty, transparency, and accountability, and help in the fight against corruption being waged by the Mexican government.