Foreign Secretary Marcelo Ebrard and the Colombian foreign minister chaired the 2nd meeting to discuss the strategic relationship, and to give renewed impetus to the bilateral agenda and agree on a roadmap for the two countries' new governments 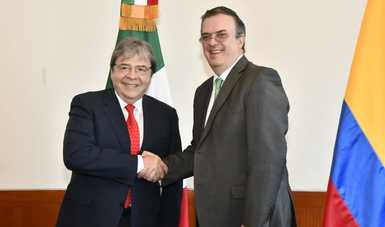 Foreign Secretary Marcelo Ebrard and Colombian Foreign Minister Carlos Holmes chaired the second meeting of the Mexico-Colombia Strategic Relationship Council in Mexico City, to give renewed impetus to the bilateral agenda and agree on a roadmap for the two countries' new governments.

The main topics of discussion were related to cooperation, security, and economic, trade, consular and migration issues, with the aim of better understanding the bilateral priorities.

In addition, the officials reviewed the technical and scientific cooperation projects between the Mexican and Colombian cooperation agencies for 2018-2020, and new potential areas of cooperation were explored, such as agricultural traceability.

Regarding educational and cultural cooperation, the two sides discussed strengthening basic and higher education in both countries and exchanging experiences between educators  in intangible cultural heritage and traditional cuisine.

With regard to economic and trade issues, they discussed the progress made in standardizing the documents that facilitate bilateral trade, and they committed to continuing to find and develop ares of opportunity for strengthening the economic relationship and increasing investment between the two countries.

Both officials agreed that Colombia and Mexico have extensive experience in security matters, which they share through reciprocal cooperation programs that are regulated by existing legal procedures and instruments. They announced that the security and defense agencies of both countries are currently working together to study the feasibility of projects that would ensure protection for their citizens, which would address a shared problem.

With regard to consular and migration issues, the two officials announced the future publication of a joint Traveler's Guide for Colombians and Mexicans who wish to travel to the other country. They also stressed the close diplomatic relationship between Mexico and Colombia, which currently share diplomatic offices in Ireland.

Both governments reaffirmed their readiness to strengthen the already solid bilateral relationship; to keep in contact regarding regional events, and to coordinate their collaboration to help strengthen the Pacific Alliance.

Colombia offered to host the third meeting of the Colombia-Mexico Strategic Relationship Council in Bogota on a mutually agreeable date in the future.