Mexico Considers Attack in El Paso an Act of Terrorism Against Mexicans in the U.S.

Foreign Secretary Marcelo Ebrard announces diplomatic, legal and protective measures for the Mexican community; justice will be sought for the victims of the attack. 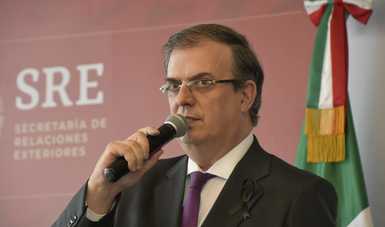 Mexico considers attack in El Paso an act of terrorism against Mexicans in the U.S.

Mexico categorically repudiates and condemns the cowardly attack carried out yesterday in El Paso, Texas, which it considers an act of terrorism against innocent Mexicans.

Therefore, on behalf of the Government of Mexico, the Foreign Ministry will take a series of legal, diplomatic and protective measures to ensure justice for the victims of the shooting and to protect the rights of the Mexican communities in the United States.

“Mexico is outraged, but we are not proposing to meet hate with hate. We will act reasonably and firmly, in accordance to the law," Foreign Secretary Marcelo Ebrard said this afternoon.

The Foreign Secretary said he regretted to report that, so far, there were six confirmed Mexican fatalities and another seven had been seriously injured as a result of the attack at a shopping center in the border city of El Paso, Texas.

The Secretary reiterated his condolences to the families and friends of the victims.  He said the Foreign Ministry would work to ensure that they had legal representation and would accompany them in taking the necessary steps during the criminal investigation begun by U.S. federal authorities.

He also said the Foreign Ministry would ask for an investigation into how the gun used in the attack was sold.

Foreign Secretary Ebrard said the Foreign Ministry had been in communication with and provided information to the Attorney General of Mexico (FGR) so that, if the FGR so decided, it could initiate legal action for terrorism against Mexican nationals in the United States.

“If appropriate, the Attorney General's Office will evaluate if the necessary elements exist to request the extradition of the perpetrator or perpetrators of this act... This should come as no surprise, because for Mexico, this individual is a terrorist," said Foreign Secretary Ebrard.

The Foreign Secretary announced that the Foreign Ministry would send a diplomatic note to the United States government tomorrow, respectfully but firmly asking it to take a clear and forceful position against hate crimes.

Emergency meetings will be held in several U.S. states to instruct Mexico's consulates to provide additional measures of protection for Mexicans. The first of these meetings will take place in Texas, California, Illinois, New York and Georgia.

In addition, Mexico will convene a conference of all Spanish-speaking countries with communities in the United States in order to advocate for defending the rights of Hispanics in the U.S. correctly and according to the law.

Foreign Secretary Ebrard conveyed his condolences to the people and government of the United States for the recent events in El Paso, Texas; Dayton, Ohio; and Chicago, Illinois.

“We know that the people of the United States are also in mourning. We hope that what we have lived through this weekend never happens again.  Never again,” said the Foreign Secretary.