The prevention and control actions "Wash, Cover, Flip and Throw out" remain essential for the prevention of Dengue, Chikungunya and Zika in Mexico. 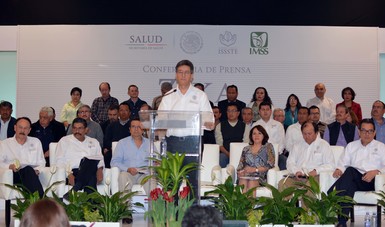 Because of the association of complications as microcephaly by Zika virus infection in pregnant women, it is very important to continue with prevention and control actions.

Zika virus infection is a disease caused by a virus that is transmitted through the bite of the Aedes aegypti mosquito, transmitter of the same vector of Dengue and Chikungunya. It was first isolated in a monkey in the Zika forest in Entebbe, Uganda (Africa); since 1968 outbreaks have been reported from this disease in tropical Africa and parts of Southeast Asia.

In Mexico, January 8, 2016 have been confirmed 15 indigenous cases of infection Zika virus in the states of Chiapas (10), Jalisco (1) and Nuevo Leon (4), while there have been three cases imported in Queretaro (1), Nuevo Leon (1) and Tamaulipas (1).

Zika virus infection is characterized by:

There is no specific treatment and as for Dengue and Chikungunya, the treatment is only symptomatic and for relieve pain and fever. There is no vaccine to prevent the infection of this virus.

It is important to note that Brazil has reported an association between microcephaly and Zika virus infection in pregnant women. Microcephaly is a neurological disorder in which the circumference of the head is less than average for a baby of their size or age. This country has reported the occurrence of three deaths attributed by Zika virus infection.

Since May 2014 in Mexico have taken steps to prevent Zika virus infection through prevention campaigns and health promotion, preventive travel advisories, warnings and epidemiological actions for vector control.

Mexico´s Epidemiological Surveillance System is ready for diagnosis of infections by Zika virus.

In addition to the prevention and control of the vector, in the coming days it will spread a campaign in media about the importance of preventing Zika virus infection especially among pregnant women, to prevent complications such as microcephaly.

It is necessary to continue spreading the following recommendations:

Recommendations to the public:

Pregnant women besides these recommendations should attend prenatal checkups.

We hope that in the coming weeks or months the disease will disperse in the country.

So far in Mexico there have been no deaths from the disease by Zika virus.