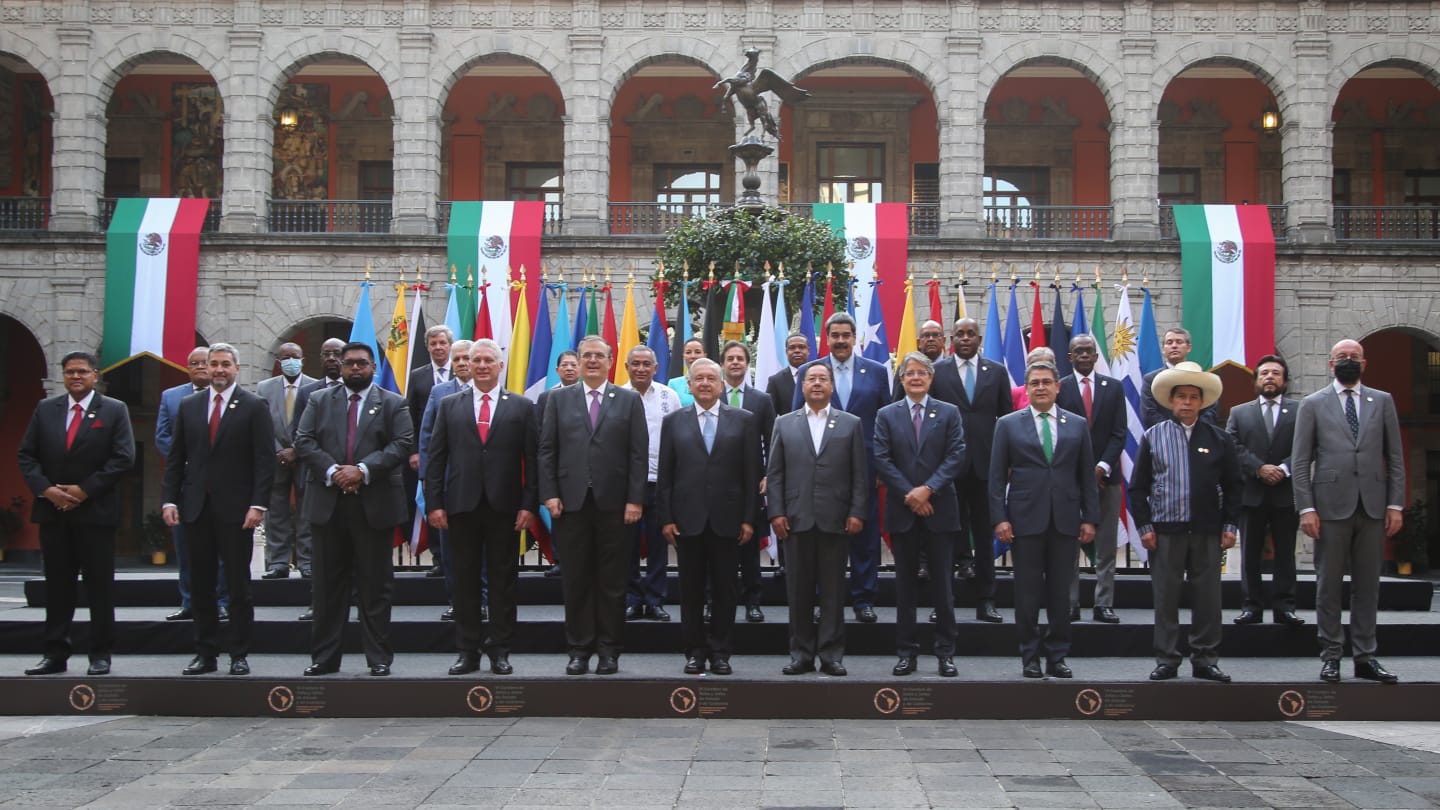 I am pleased to preside over this Celac meeting.

I would like to note the presence of Charles Michel, President of the European Commission; Alicia Bárcena, from ECLAC; and presidents, ministers, and diplomatic representatives from Latin America and the Caribbean.

In these times Celac can become the main instrument to consolidate relations between the countries of Latin America and the Caribbean, and achieve the ideal of economic integration with the United States and Canada within a framework of respect for our national sovereignties. That is, to build in the Western Hemisphere something similar to what was the economic community that gave rise to the current European Union.

It is our feeling that this ideal can become a reality if we think and reach agreement on three basic questions:

One. Non-intervention and the peoples’ right to self-determination, cooperation for development, and mutual aid to combat inequality and discrimination.

In the political arena, a commitment to respect the internal decisions of each nation and that no government should arrogate to itself the power to subjugate another country for any reason, cause or pretext, or to do so through the use of money, propaganda, economic and diplomatic sanctions, or the use of force.

That disputes over democracy and human rights be settled at the request of the parties involved in truly neutral bodies, created by the countries of the Americas, and that the specialized agencies of the United Nations have the last word.

Two. With regard to economic and commercial questions, I propose that together with the United States and Canada, we reach an agreement and sign a treaty to strengthen the internal market in our hemisphere, which is currently in the red in relation to Europe and, especially, with regard to Asia.

Let’s bear in mind that the Western Hemisphere has only 24 percent of the population of Asia. Nevertheless, we consume 20 percent more than that continent; that is, per capita consumption in the Americas is 23,347 dollars a year, while in Asia it is 4,716 dollars. However, this gap has been decreasing due to the productive stagnation in the Western Hemisphere and the manufacturing and commercial boom in the Asian countries.

The proposal is simple. It is a matter of reactivating the economy of our hemisphere in order to produce what we consume in the Americas.

We have many advantages. Among others, we have a young and creative workforce; there is good level of technological development; we are a continent rich in natural resources, with broad cultural diversity. Furthermore, the distances between our countries allow us to save on shipping costs and, I would like to reiterate, there is sufficient demand for goods in our markets.

All that is required is joint planning with the participation of institutions such as the Economic Commission for Latin America and the Caribbean, ECLAC, the Inter-American Development Bank, the IDB and others, and to ask these agencies to draw up a plan with the lofty goal of promoting the economic, financial and commercial community of the countries of the Americas.

Three. Finally, this productive integration with a social dimension must include an investment component for the well-being of all the peoples of the Americas, based on the criterion that progress without justice is a step backward. It is a matter of moving toward modernity, but forged from below and for the benefit of all.

Let us recall that on March 13, 1961, President John F. Kennedy unveiled the plan known as the Alliance for Progress 1961-1969 at the White House, before ambassadors from Latin America and the Caribbean. It was the time of the Cold War and Cuba and the Dominican Republic were excluded, but even with that error, President Kennedy recognized in his speech that in Latin America, and I quote, “millions of men and women suffer the daily degradations of poverty and hunger. They lack decent shelter or protection from disease. Their children are deprived of the education or the jobs which arc the gateway to a better life. And each day the problems grow more urgent.”

However, the amount earmarked for Latin America and the Caribbean at that time was the only significant amount allocated for development cooperation in our hemisphere in more than half a century.

I think that now is the time to put an end to the lethargy and propose a new and dynamic relation between the peoples of the Americas. It seems to me that it is time to replace the policy of blockades and poor treatment with the option of respecting each other, moving forward together, and associating for the good of the Americas without infringing on our sovereignty.

Would President Biden not have the support of the U.S. Congress to allocate resources to benefit the peoples of the Americas and reduce inequality and violence in the region, which are the main causes of social unrest and migratory flows?

Imagine, for example, the gesture of goodwill signified by providing vaccines to most of the countries in Latin America and the Caribbean that have not been able to protect their people from COVID due to lack of economic resources.

I am sure that President Joe Biden and Vice President Kamala Harris, as well as the Prime Minister of Canada, Justin Trudeau, will be attentive to the consensus proposals that we establish in this forum for the good of our respectable peoples.

Welcome and thank you very much.