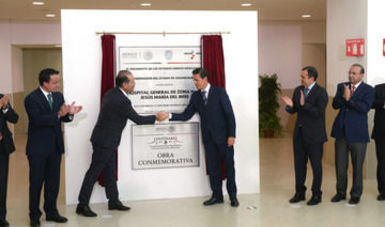 For the first time in the history of Mexico, over one million jobs have been created in just 10 months, in other words, so far this year”: EPN

This Administration has achieved the highest number of jobs created: 3,328,000 formal jobs, nearly twice the number created in a similar period in any other Administration.

President Enrique Peña Nieto today closed the 108th Ordinary General Assembly of the Mexican Institute of Social Security (IMSS), during which he urged attendees to continue “Combining efforts to consolidate the Social Security Institute as a key element in the transformation of Mexico”.

“Let us continue investing, building and innovating in this Institute to become a benchmark for social security in the 21st century,” he added.

He pointed out that during this administration, “Increasing numbers of Mexicans are exercising their right to quality medical services, insurance that protects them in the event of accidents or disability, recreational, cultural and sports services, and a retirement pension”:

“There is still a way to go to achieve the universal social security Manuel Avila Camacho envisaged. To achieve this, we must protect the achievements we have gained through everyone’s efforts. We must also take care of the staff who, through their daily work, give life to this noble institution,” he said.

A the IMSS assembly, held outside the capital for the first time, the president announced that, “According to the most recent Social Security data, 194,758 jobs were created in the country in the country, setting three important records”:

“First: it is the highest number, for any month, on record in the Social Security Institute. There has never been a month with as many jobs as those registered in October of this year.

Second: “Having created this amount of employment sets another record: for the first time in the history of Mexico, over one million jobs have been created in the first 10 months of this year.

He said that another encouraging fact is that, “Of all these jobs, nearly 30 percent have been for young people, and more than 40 percent for women. All this is also reflected in the 3.6 percent unemployment rate reported yesterday by INEGI. It is the lowest figure for a third quarter on record”.

The president declared that in this government, “The workers’ and employers’ sectors have teamed up to transform this great institution, the Mexican Social Security Institute, for the benefit of all its members. Thanks to everyone’s service and commitment, we now have a new Social Security Institute. Today we have a institute that is more accessible and sensitive to the needs of its beneficiaries”.

He acknowledged the, “Institutional effort made to reduce waiting times in the scheduling of consultations, hospitalizations and surgeries, as well as to digitize their services."

“The provision of all services has improved and unnecessary procedures have been eliminated. The best example of this is that now practically four out of five procedures can be done online,” he said.

He announced that in order to continue advancing on this route, he has issued instructions to the Director General of the Social Security Institute, “So that beneficiaries who suffer an accident can also apply for their sick leave on the Internet. In addition, these payments must be deposited electronically in the beneficiary's bank account.

“In a nutshell, today we also have a new Social Security Institute as well as an innovative one. The care and prevention models that have been created, such as PREVENIMSS and the Heart Attack Code, promote healthy habits and save lives. With the new CHKT online application, the Social Security Institute makes the data it has collected for more than seven decades available to its members so they can calculate their risk of developing diabetes or high blood pressure,” he said.

He said that, “The financial strength of the institution has provided it with resources to expand and renew its network of clinics and hospitals, undoubtedly the most ambitious, most extensive program registered in the past 35 years,” as a result of which 12 new hospitals and 40 new clinics will be built during this administration.

As president, I am pleased to be part of this great effort and these results, which have been achieved through the joint efforts of employers, unions and the Social Security workers,” he said.

The president recalled that in 1940 the then President Manuel Avila Camacho hoped that: “Soon, the social security laws would protect all Mexicans at times of adversity, when they are orphaned or widowed, in sickness, unemployment and old age”.

He said that in order to achieve this lofty goal, “The Mexican Social Security Institute was created in 1943, initially serving 355,000 beneficiaries, barely 2 percent of the national population”.

He said that 74 years after its foundation, “This institution covers a universe of 74 million beneficiaries, including those of IMSS-PROSPERA, in other words, more than half the inhabitants in our country”.

He said that, “Over the past five years, the number of the Institute’s beneficiaries has increased by almost eight million people, due to the record amount of job creation in Mexico”.

The president thanked General Director of the Mexican Social Security Institute Mikel Arriola. "He is a collaborator who has acted with a great sense of commitment, responsibility; who has complied in a timely manner with the indications he has received from the president, and today he has shared with us the progress, achievements and good results that the Mexican Social Security Institute has achieved,” he said.

THE IMSS WENT FROM BEING IN THE RED TO BEING IN THE BLACK; WHICH HAD NOT HAPPENED FOR 35 YEARS: MIKEL ARRIOLA

In his report to the Assembly, Director General of the IMSS, Mikel Arriola, said that thanks to discipline and financial strengthening, 2016 was the first time in the past eight years that it did not use its reserves, which permitted a surplus of 6,400 million of pesos and made it possible to go from red to black numbers, which had not happened for 35 years.

He announced that the IMSS’s financial viability is guaranteed until 2020.

To improve medical care, he highlighted the investment in infrastructure for more than 33 billion pesos for 12 new, modern hospitals, including one in Colima and the one inaugurated today in Aguascalientes, as well as another 40 Family Medicine Units. He also announced the first-ever purchase of 12 linear accelerators, seven magnetic resonators, 1,612 technological impact devices and 56 mammography machines.

Regarding the prevention of chronic diseases, he said that the New Preventive Model and digital tools, such as Chkt Online will stop the increase of diseases such as diabetes, hypertension, breast and prostate cancer, which will increase life expectancy and maximize the productivity of beneficiaries.

Mikel Arriola mentioned that 2017 has been a record year for medical supplies, since 99.5 percent of prescriptions are filled, with an average of 17 million prescriptions per month.

Moreover, as the president instructed, “In his campaign for prescription vouchers, when a prescription is not filled, a voucher is issued. In 2015, we had 5.7 million people in this program, whereas today,  coverage has expanded to include 15.4 million beneficiaries,” he said.

WE HOPE TO ACHIEVE ONE MILLION MORE EMPLOYEES DURING THIS ADMINISTRATION AND WE ARE SURE WE ARE GOING TO ACHIEVE THE GOAL OF 20 MILLION CONTRIBUTORS: EMPLOYERS’ SECTOR

On behalf of the employers’ sector, Manuel Herrera Vega, President of the Confederation of Industrial Chambers (CONCAMIN), endorsed his, “Commitment to the people of Mexico and their government to continue working together, and maintain the pace of employment growth, which has been reflected in the Institute’s data”.

He said that, “Together, the labor and business sector are achieving record figures for employment and beneficiaries. In short, we hope to achieve one million more jobs in this administration and we are sure that we will reach the goal of 20 million contributors, and one million employer records, before the end of this administration”.

Today, Mexico’s entrepreneurs are convinced that, together with the workers' sector, academia and Mexican society, we must be the great actors of change in a constructive dialogue with the three levels and branches of government. The tripartite model like the one we have in the IMSS is a good example of governance from a spirit of commitment like the one that everyone here and millions of Mexicans have,” he said.

He went on to say: "Mexican businessmen have believed and believe in ourselves in any scenario, and most importantly, we believe in Mexico and above all, Mexicans”.

THE WORKERS' SECTOR CONTINUES TO THRIVE, IT IS STRONG AND SUPPORTS ITS GOVERNMENT: CARLOS ACEVES DEL OLMO

Carlos Aceves del Olmo, Secretary General of the Confederation of Mexican Workers (CTM), expressed his appreciation for the work of President Enrique Peña Nieto and the Director General of the IMSS for the attention paid to workers’ social security.

He also thanked the Mexican Social Security Institute staff for their solidarity and timely attention during the emergency caused by the earthquakes last September. “The Mexican workers’ sector pays tribute to them, respects them and appreciates them very much and thanks them for everything they did, because they didn't only do it because we were in a crisis, but because they felt moved to do so,” he said.

He declared that the great asset of the IMSS, “The most valuable aspect of the Social Security Institute is its people, all its people and, of course, its administration, which is also made up of people”.

He said that, “The president was its main defender and the first person to find out what people needed”. He added that people, “Are expecting us not to give up and as the president went out directly to help and did not give up, the workers’ sector continues to thrive, it is strong and it supports his government, because we want to achieve many better things,” he concluded.

OUR COUNTRY IS RESOLUTELY STRENGTHENING ITS INSTITUTIONS: GOVERNOR OF AGUASCALIENTES

In expressing his willingness to reinforce a framework of coordination and collaboration with the government, Governor of Aguascalientes, Martín Orozco Sandoval, said that Mexico is resolutely strengthening its institutions, "and the irresponsible expressions and opinions that criticize them for no reason do not contribute to productive or constructive work”.

He pointed out that, in our country, democracy is invigorated by criticism and proposals, control and demands, but not by irrational criticism.

He thanked the IMSS authorities and union for holding its Assembly in this state, which is the first time it has been held outside Mexico City. "The doors of Aguascalientes are always open for the president and for all of you, to continue working hand in hand for a more prosperous and competitive country. Let's keep growing together, let's continue moving Mexico towards a better future”.

PRESIDENT PEÑA NIETO IS A GREAT ALLY OF THE SOCIAL SECURITY INSTITUTE: SNTSS

Secretary General of the National Union of Social Security Workers (SNTSS), Manuel Vallejo Barragán, thanked President Peña Nieto for strengthening the IMSS and its workers, adding that, “His actions make him a great ally of the Social Security Institute”.

"We reiterate our absolute respect and appreciation, and we confirm the offer to continue carrying out our work with responsibility and excellence for the benefit of the population. The workers of the Mexican Institute of Social Security will always be with you to promote labor peace,” he said.